th Liverpool legend Graeme Souness has praised a ballboy for his role in Liverpool’s fourth goal against Barcelona. Trailing 3-0 and without Salah and Firmino, a goal from Divock Origi and two goals from substitute Gini Wijnaldum drew Liverpool level with Barcelona.

During the 79th minute, Liverpool won a corner and as soon as the ball went out, a ballboy quickly passed another ball to Trent Alexander-Arnold. At this time, many Barcelona players were nonchalantly standing around the penalty box but the Liverpool players were ready. Taking advantage of this, Trent Alexander-Arnold quickly took the corner and Divock Origi hit the ball into the net to put Liverpool 4-0 ahead and 4-3 on aggregate.

The ballboy’s alertness played a major role in Liverpool scoring their fourth goal and Graeme Souness feels that the ballboy should be rewarded with a season ticket and two Champions League final tickets for his effort.

After seeing off Barcelona, Liverpool play their final league game and penultimate game of the season against Wolves at Anfield before playing the Champions League final on the first day of June. 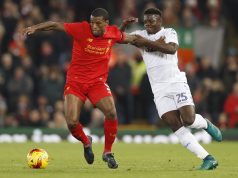