Prior to coming to Liverpool, this is how Klopp and Henderson were awaiting their heroes welcome!

“We are looking forward to Liverpool now,” Klopp had told Sky Sports. “People said there will be a million people [attending the parade] and that will be special.

“I think that will be the moment when we really understand what we did. It is for the people, it’s the people’s cup.

“We will see the joy in their faces, being close to them with the team. That doesn’t happen a lot and it will be amazing.”

“It feels amazing,” Henderson had said. “It still hasn’t sunk in properly, to be honest.

“But we’re looking forward to taking it back to Liverpool to show the fans.Amazing night

“All the lads can’t wait. We just want to get back and party in Liverpool.”

Well now the parade is done and boy did it live up to their dreams. Klopp getting emotional, Van Dijk taking over the microphone, the people of the entire planet in one Liverpool street and the weather doing its bit to stay sunny in Liverpool for the people.

This time will surely win a lot more! 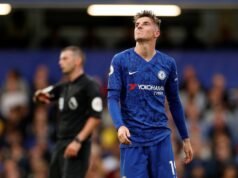 English midfielder Mason Mount would be a huge coup for Liverpool