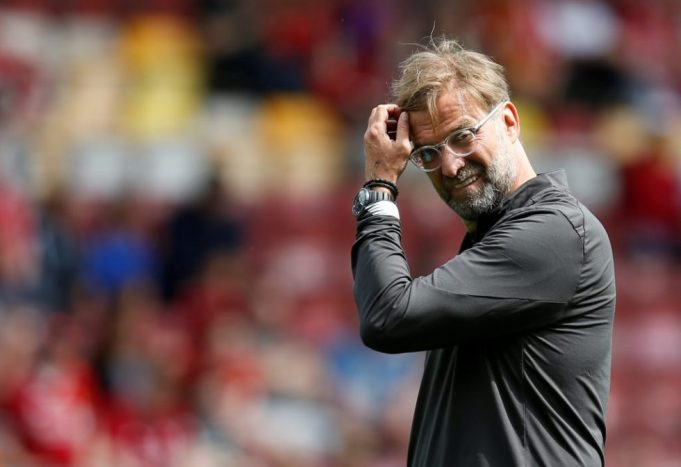 Mohamed Salah looked visibly irritated when taken off in the 1-0 defeat against Chelsea.

Jurgen Klopp made the surprising decision to take the Egyptian off when the Reds were trying to equalize.

Mason Mount’s strike after the hour mark put the visitors in front after which a double substitution of Diogo Jota and Alex Oxlade-Chamberlain was made. Salah’s agent sent out a cryptic tweet after the incident as Klopp played it down completely later on.

“That the boys look disappointed, that’s not a problem. I didn’t see what Mo did,” Klopp told reporters.

“The reason for the substitution… I could have changed other players in that moment, that’s true, but the reason was that he looked in that moment like he felt the intensity really and I didn’t want to risk him, that’s all.

“It’s very rare, I’ve known him now long, and usually Mo looks surprisingly fresh until the end. [But] he didn’t look fresh anymore and I thought that’s a sign; in our situation I didn’t want to risk him.”

Klopp was further questioned regarding the alarming form Liverpool are stuck in. He continued, “Not tonight. I try to be as honest as possible. I told the boys what I saw tonight.”

“That’s what I told the boys. In these moments, it’s not about tactical things or stuff like that, it’s about heart and these kind of things. I’m not saying that the boys didn’t show heart, I know that they [did] their best, but talk about the decisive two/three/four per cent.

“[That] we will start blaming the circumstances or whatever, that’s just not the case. We had a good team, a really good team on the pitch tonight, and we played in a lot of moments good football.

“But not in the decisive moments good enough and there’s only one person or group to criticise for that: that’s me and us. That’s what I told the boys.”