In his first Champiions League Final, Klopp’s Dortmund were up against arch-rivals Bayern Munich. Mario Mandzukic pened the scoring for Bayern Munich before an Ilkay Gundogan penalty leveled the game. Then, in the final minutes of the game, Arjen Robben sealed the win for Bayern Munich.

Last season, Klopp led Liverpool to their first Champions League final in 11 years where they were up against Real Madrid at Kiev. A massive error from Liverpool goalie Loris Karius allowed Karim Benzema to open the scoring for Real. However, Sadio Mane netted the equaliser for Liverpool soon after. Then, two goals from Gareth Bale gave Klopp his second defeat in as many Champions League Finals. Besides the two Champions League Finals, Klopp also had to be on the losing end when Liverpool lost to Sevilla in the Europa League Final in 2016. In all of Klopp’s European finals, his team has scored only one goal.

This season, Liverpool have a very good chance of winning the Champions League and handing Klopp his first European title. Klopp hopes that he will be third time lucky at Madrid.

Klopp said, “In Germany we have a saying: ‘All the best things come in threes’. At Mainz, I missed promotion twice and we got promoted in the third season. We hope that it will repeat itself for the Champions League. I think it’s quite cool, to be honest.

“It’s a fourth European final for me [including the 2016 Europa League], that’s cool. I have had good teams and the players have gone beyond their limits in order to qualify. So far, it’s been a great campaign for us.” 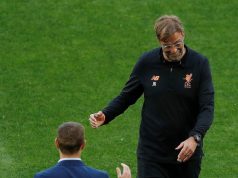