What will be the Liverpool predicted line up for their clash against Arsenal?

Liverpool Predicted Line Up vs Arsenal

Liverpool predicted line up could be tricky to tell especially on the defensive end. Jurgen Klopp is facing a major issue with some of his senior choices injured.

So far, the attacking setup could also see some changes with only Diogo Jota currently firing on all cylinders. So, who do you think will lineup against Arsenal on Wednesday?

In goal, we can expect Alisson Becker to continue over Adrian. As for the centre-backs, Virgil Van Dijk and Joel Matip should partner up with Trent Alexander-Arnold and Andy Robertson covering the flanks.

Jordan Henderson and Fabinho should feature in midfield next to Thiago Alcantara.

A fully pumped front three of Luis Diaz, Sadio Mane and Diogo Jota could return for this game. 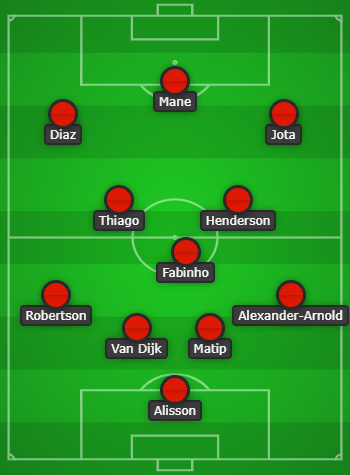 Here we will give you an answer to the most frequently asked question about Liverpool – Arsenal.

Liverpool ended their 12-match unbeaten run with a loss against Inter Milan in their last Champions League clash. They have now closed the gap to league-leaders Manchester City and are three points behind them with a game in hand.

The Gunners have pretty much bounced back for European qualification in the league. But Mikel Arteta’s men will still want to finish strong, including putting up a strong performance against the former English champions.

Head to Head – Liverpool predicted line up vs Arsenal

Tonight’s match is the 237th meeting between Liverpool and Arsenal. The Reds have won 93 of the games while Arsenal have managed 81 wins for themselves and the other 62 ended as draws.

See all Liverpool vs Arsenal Head To Head results.