What will be the Liverpool predicted line up for their clash against Brentford?

Liverpool Predicted Line Up vs Brentford

Liverpool predicted line up could be tricky to tell especially on the defensive end. Jurgen Klopp is facing a major issue with some of his senior choices injured.

So far, the attacking setup could also see some changes with only Diogo Jota currently firing on all cylinders. So, who do you think will lineup against Brentford on Thursday?

In goal, we can expect Alisson Becker to continue. As for the centre-backs, Matip and Van Dijk should partner up with Williams and Tsimikas covering the flanks.

Jordan Henderson and Fabinho should feature in midfield next to Curtis Jones.

A fully pumped front three of Takumi Minamino, Roberto Firmino and Diogo Jota could continue for this game. 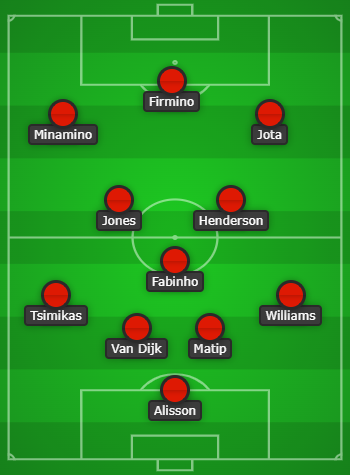 Here we will give you an answer to the most frequently asked question about Liverpool – Brentford.

The Reds will have players like Salah and Mane unavailable for the entire month of January due to their participation in the AFCON. It would be tough for Klopp to manage without the two best players on the team. They had a draw against Brentford last time but their home record gives them an extra edge.

The Bees will be looking to surprise Reds like they did last time at home by managing a draw. They are coming off two successive wins.

Head to Head – Liverpool predicted line up vs Brentford

Tonight’s match is the 17th meeting between Brentford and Liverpool. The Reds have won 09 of the games while Brentford have managed 03 wins for themselves and the other 04 ended as draws.

See all Liverpool vs Brentford Head To Head results.