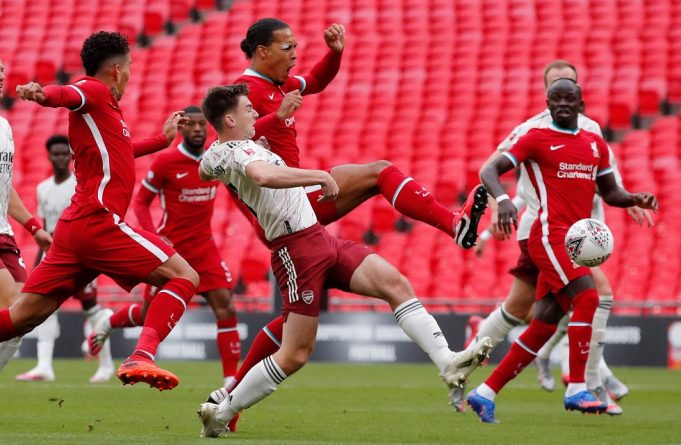 Our Liverpool vs Arsenal betting tips and predictions

We expect a Liverpool win at 2.00 with Unibet. Below you can read the reasons for our Liverpool vs Arsenal betting tips prediction.

We expect Mohamed Salah to score first at 4.00 with Unibet

Here are a few Liverpool vs Arsenal free bets and special offers from the betting companies:

Reasons For Liverpool vs Arsenal Betting Tips and Our Predictions

The Liverpool squad are favourites to win this match 2.00 with Unibet, with Arsenal priced at 3.40 with Unibet to keep their winning run going.

Liverpool seems to have not lost a beat after lifting its 19th first division title. They comfortably went past Chelsea 2-0 and are looking to tackle another London rival. Jurgen Klopp has been stumped by Arteta’s tactics in the previous two meetings but something tells me an Anfield showdown might turn out different.

Given their performances last term, Arsenal fans can feel a bit optimistic about their chances against the English champions. They held them off to a 1-1 scoreline in the Community Shield before beating them in penalties. Drawing some points for themselves might not be as outlandish as it might have been last season and a win is possible at 3.40 with Unibet.

Speaking of quality, this will be an opportunity for Pierre-Emerick Aubameyang to get on the scoresheet. Mohamed Salah also shall be featuring and he has been handed odds of 4.00 with Unibet to score the first goal.

Liverpool face Arsenal at Anfield on Thursday evening. Both teams need the win for different reasons, with the Reds looking to increase their dominance over Arsenal.

The Reds are back to full fitness and looking as hungry as ever. They were not too troubled by Chelsea the last time out and also oversaw a close game against Leeds United.

The Gunners went past Leicester City 2-0 in the Carabao Cup after two wins over West Ham United and Fulham. They are a on a strong winning run and will face their first acid test against Liverpool.

Tonight’s match is the 232nd meeting between Liverpool and Arsenal. The Reds have won 90 of the games while Arsenal have managed 80 wins for themselves and the other 61 ended as draws.

Alex Oxlade-Chamberlain’s knee issue will stop him from appearing against his former side while Jordan Henderson picked up a thigh problem recently. Without the captain, Jurgen Klopp will be stressed for numbers in midfield.

Gomez is expected to start back up.

As for Arsenal, Mikel Arteta has plenty of injuries to think about as well. The likes of Gabriel Martinelli, Pablo Mari, Sokratis, Shkodran Mustafi and Calum Chambers continues to miss out with very different return dates.

Kieran Tierney is back and the Scotsman could feature in the three-man backline next to Gabriel Magalhaes and Rob Holding.