Liverpool New kit 2020/21 designed by Nike has created an amazing hype for everyone and the kit is finally out for everyone to see!

Here you can also read more about the new Liverpool kit release date – for home, away, and alternate kits!

So the first kit of the new season has been dropped and it is an absolute banger! They have released the new home kit for Liverpool and Nike has done an exceptional job on it.

The other kits are work in progress!

The away kit for Liverpool will be released in the coming weeks but we hear that the rumor going around is that it will be black in color! There will be no stripes but nothing is for sure of course!

The new kit looks slick with slight new additions for borderline in the neck and the sleeves.

Henderson, Alisson and Virgil Van Dijk from the first team for men have been pictured in it and it looks like an absolute belter.

The green and white borders on the sleeves and the neck adds that extra little color and spirit to the bright red that is Anfield and Liverpool!

Van Dijk who has already been using the Nike logo on his jersey while playing internationally for Holland added:

“I’ve been part of the Nike family for six years and we have an incredible relationship,” the Holland international said.

“I’m very familiar with the quality of the design and innovation that goes into making a kit like this.

“Stepping out as champions next season in this kit will be really special.”

Liverpool new 3rd kit? Liverpool’s new training kit is in the works and so is the third kit. Here is what we know about the new Liverpool 3rd kit 20/21:

When is the new Liverpool kit out?

When does the it come out? The release date for the away, home and 3rd kit are all different.

It is supposed to come out by August end along with the training kit for the new season.

The home kit is out now and set for pre-order to be delivered by 6th August while the rest are in the works. 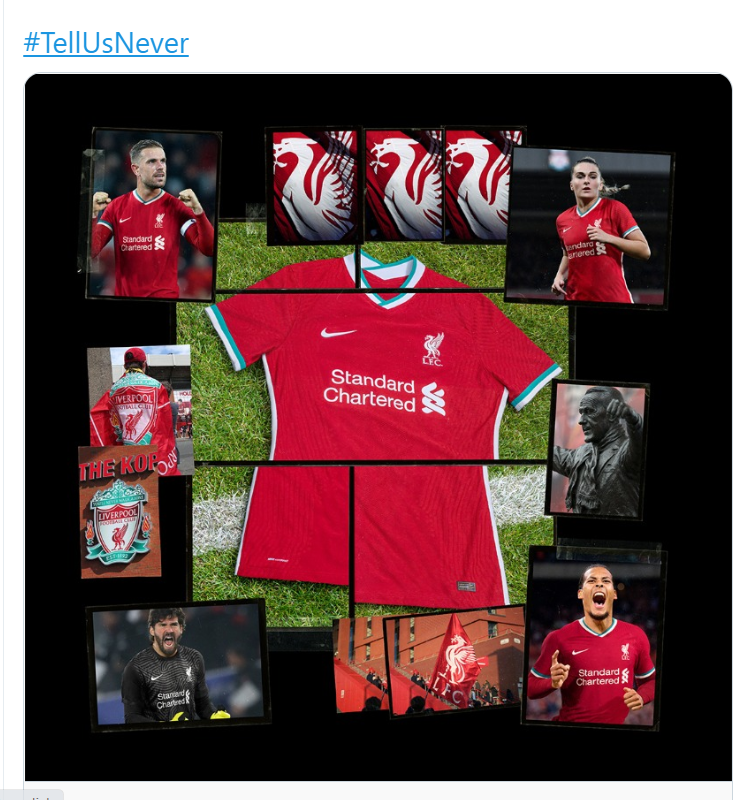 Liverpool kit deal? The club signed a new deal with Nike that is at a staggering worth $39.5 million per year.

The deal is lesser than what Liverpool had with New Balance which was at $52.6 million per year.

However, the problem began as New Balance were reportedly not respecting their deal and Liverpool found Nike to be a perfect solution.

The new Liverpool Nike deal is lesser in price than the previous deal but Liverpool chose Nike over New Balance anyway as they promised higher distribution powers owing to the fact that Nike is a bigger global brand than Liverpool.

The deal is good however, because Liverpool besides the promised amount will also earn a number from the shirt sales which might see them over take United in terms of income from jersey sponsorship. United have set the record at $98.5 million.

This is what Liverpool bosses had to say about the historic Nike deal:

“Our iconic kit is a key part of our history and identity,” Billy Hogan, Liverpool’s managing director and chief commercial officer, said of the new deal.
“We welcome Nike into the LFC family as our new official kit supplier and expect them to be an incredible partner for the club, both at home and globally as we continue to expand our fanbase.
“As a brand, Nike reflects our ambitions for growth, and we look forward to working with them to bring fans new and exciting products.”
The special addition to the jersey this time is the nape of the neck which is the 96 emblem encased by eternal flames, paying tribute to the 96 children, women and men who tragically lost their lives in the Hillsborough disaster.
The club’s managing director and chief commercial officer Billy Hogan – and soon-to-be new CEO – announced: “We said back in January, when we first announced the new partnership with Nike, about our expectations on them becoming an incredible partner for the club. We’re so excited to be starting this journey with Nike, the global leader in sports apparel and we look forward to working together to bring performance and lifestyle product to our supporters in the year ahead.”